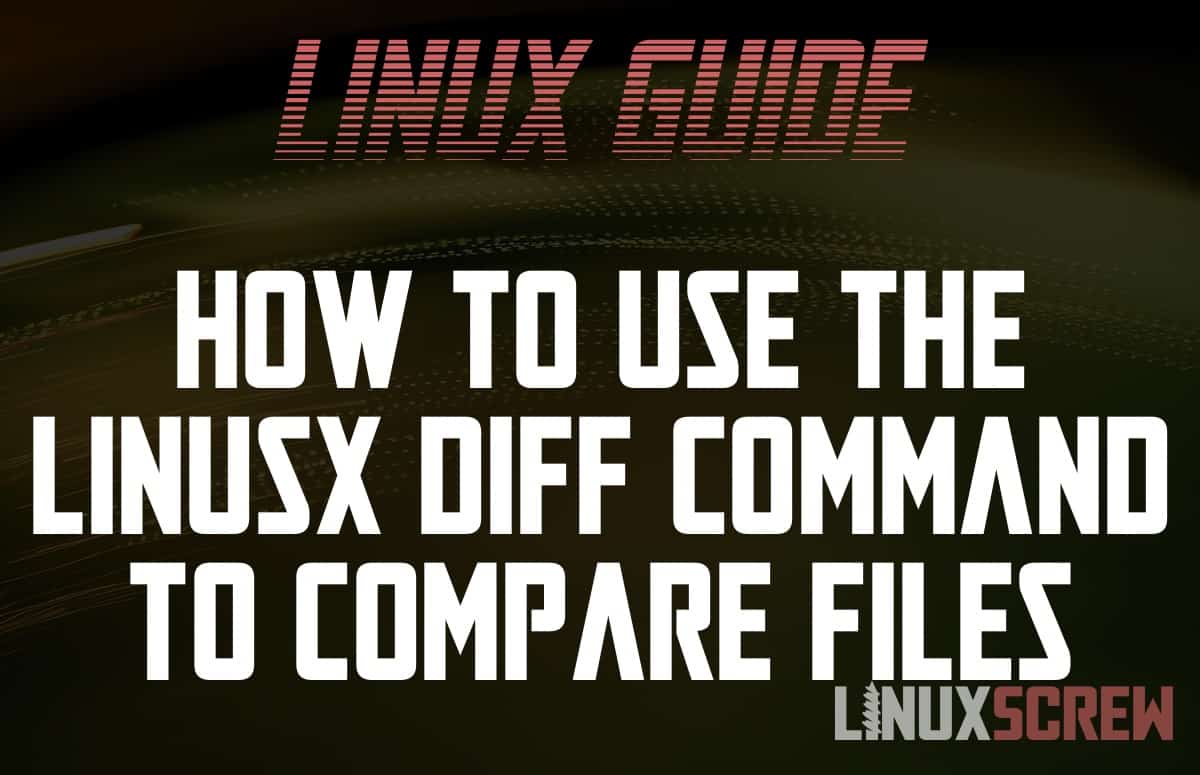 The diff command is an easy way to compare files or directories from the Linux shell. This article will show you how to use it, with some examples of common usage.

The diff command performs a line-by-line comparison of two files or directories and outputs the differences between them.

Why would you want to compare files or directories?

You’ll probably have your own reasons for comparing files, so on to diff and how to use it.

Here are the most commonly used OPTIONS for the diff command, straight from the user manual:

You can view the full manual here or run:

…from the command line for a full set of options.

Comparing Files with diff in Linux

This is the simplest usage of the diff command and will output the difference between the two supplied files to the console:

If you are simply looking to view the differences rather than creating a patch, simply redirecting the output to a file is useful – so that the terminal doesn’t cut off any changes if there are a lot of them:

This will create (or overwrite!) differences.txt, which will summarize the differences between the two files.

The -q options has been added so that only the differences are listed; files that are the same won’t be mentioned to make it easier to see what’s happening.

Directories can also be compared using the -r (recursive) option to compare their contents:

Again, I have used the -q option here so that only differences are listed.

diff is an intensive process – every file being compared needs to be read and compared. It can take a while.

The –speed-large-files option alters diff’s algorithm to make it more efficient if you are comparing large files – speeding things up a bit.

Creating a Patch for a File

To create a patch – a list of differences between two files that can be applied to another copy of the first file to make it identical to the second, the following command can be used:

The -u option outputs the differences in a unified format which can be used by the patch command to update the original file with the changes.

This is useful if you have a friend or colleague who is using some of your data or programming code, and you want to send them updates you’ve made without sending over the whole dataset or application again.

Installing a Patch for a File

When your friend receives the patch, they can apply it using the following patch command:

Undoing a Patch for a File

If you made a mistake, you could undo a patch by running it in reverse with the -R option:

Creating a Patch for a Directory

The following command will create a patch for an entire directory by running the -r (recursive), -u (unified format), and -N (treat absent files as empty) options.

Installing a Patch for a Directory

A patch can be applied to a directory using the -p0 option, which will apply the patch to the same directory structure as it was created in:

Undoing a Patch for a Directory

Finally, undoing/reversing the patching of a directory: