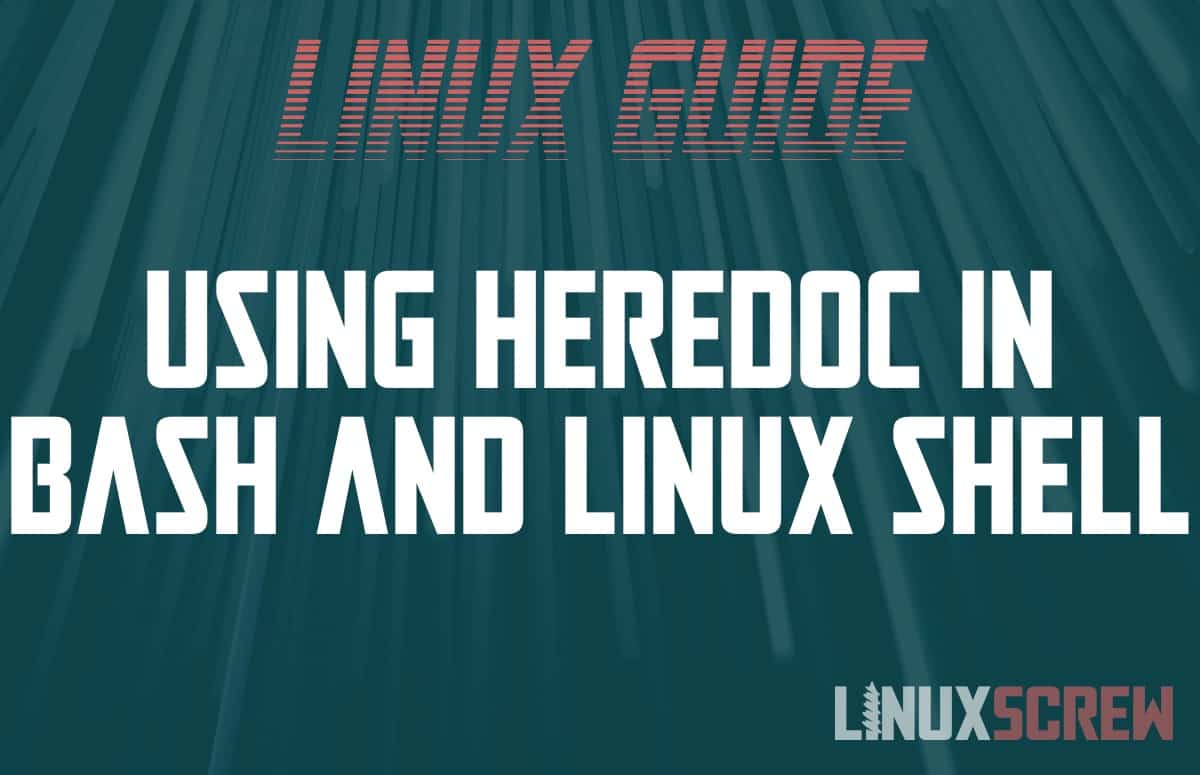 This article will show you how to use a Heredoc (Here Document) in Bash/Shell scripts to work with multi-line text.

Heredocs are most useful for accepting multi-line input- the user can enter a line of text, press enter, then enter the next line, and so on. It can also be used to define multi-line text in scripts.

It can also send multiple commands into an interactive program – this will be shown in the examples later.

The examples in this article will work in both Bash and Zsh Shells.

Heredoc is commonly used with Standard Input/Output and redirection/piping to send the multiline text to other commands for processing, formatting, or display. This topic really needs an article to itself to explain the concept, so here it is:

The examples below will use the concepts and methods covered in the above article at several points.

To start a Heredoc, you simply use the << command. This is a form of Input/Output redirection outlined above.

The syntax for using a Heredoc is as follows:

This example will accept multiple lines of text and send them to the cat command for display:

The above example should be typed into your terminal program.

You can use shell variables in your Heredoc:

Above, the $PWD variable is displayed in one of the lines of the Heredoc – this variable holds the value of the current working directory.

Redirecting the output of a Heredoc

Standard redirection (see earlier in the article if you don’t know what this is) can be used to send the contents of the Heredoc after it has been sent to the COMMAND to another program or file:

Above, cat reads the contents of the Heredoc, and the output of cat is redirected and written to the file output.txt using the > command.

You can use a Heredoc in a script. As a shell script is just a list of line-by-line commands to be fed into the shell, it will behave the same way.

It’s nice to be able to indent your script code – if you don’t want those tabs to appear in your text, you can add a – (dash) to your Heredoc declaration to strip any white space from the beginning of each line:

Assigning a Heredoc to a Variable

You can assign the multi-line text in a Heredoc to a script variable by reading it with the cat command and assigning the output to a variable like so:

Heredocs can also send multiple lines of text to an interactive program. Some programs, once launched, expect you to type your own commands – they may accept text for processing or provide their own shell for issuing commands.

One example of this is MySQL – once MySQL has launched and connected to a server, you can type your own commands followed by the enter key to query data. By using a Heredoc, you can have these commands pre-written and send them into MySQL without user interaction:

Above, the MySQL command is used to connect to a given DATABASE with USERNAME and PASSWORD.

Two sequential commands will then be issued once the connection is ready – one to SHOW TABLES and one to SELECT all records from the posts table.