Ads are annoying and they slow down your internet browsing experience.  Here’s how to block them for your whole network using Pi-Hole and a Raspberry Pi Zero.

There are probably ads competing for your attention while you try to read this right now.

Pi-Hole to the Rescue

Pi-Hole is an ad blocking solution that blocks ads for your whole network – including devices that don’t support ad-blocking browser add-ons like your gaming console or smart TV.

It does this by providing a custom DNS server.  DNS servers tell your computer where to find resources on the internet.  By providing a DNS server, Pi-Hole can block all requests for resources from advertisers before they even reach your device.

Here’s what you’ll need to get a Pi-Hole set up.

The installation instructions for P-Hole can be found at:

You’ll notice that Pi-Hole isn’t a stand-alone Linux distribution that can just be flashed onto an SD card for use in your Pi.  It requires that Rasberry Pi OS be installed first.

Here’s how that’s done.  Head over to:

…and download the Raspberry Pi Imager for your OS. Now that you have a fresh install of Raspberry Pi OS, you can go ahead and power up your Raspberry Pi.  There are a couple of steps left to get it configured. With SSH enabled, you can exit the Raspberry Pi configuration tool and reboot if prompted.

One last thing – make sure you change the default password for the system by running:

Before set up Pi-Hole and unplug the monitor and keyboard from the Raspberry Pi, a static IP address needs to be configured.

On most networks, by default, when a device connects to your network it will ask your router for an IP address and be assigned one automatically.

This is usually fine, but that address can change over time.  As the Pi-Hole will be acting as a DNS server, and we will want to be able to connect to it via SSH periodically for maintenance, if the IP address changes, we won’t know where to find it.

So, a static IP address needs to be set, so that it wont’t change.

This is done on Raspberry Pi OS by editing the /etc/dhcpcd.conf file.  Below, the file is opened with the nano text editor:

You’ll see the following screen – it’s the nano text editor.  Navigate with the arrow keys, delete text with backspace, and type as normal:

Scroll down through the configuration file until you see the line

By default this configuration is commented out – the lines beginning with a # are ignored by the system.  Uncoment the lines so that this section looks like the below:

Here’s what those values mean:

Notice I’ve left out the IPV6 configuration to keep things simple – most home networks do not use IPv6.

Press the CTRL + X keys to quit the nano text editor.  Press Y to save and confirm the changes.

Reboot to apply the changes:

Log back in and run the following commands to make sure your Raspberry Pi OS software is up to date:

Pi-Hole can now be installed on top of Raspberry Pi OS!

Run the following command to download the installation script:

Execute the installation script by running:

If all goes well, you’ll see the following screen: 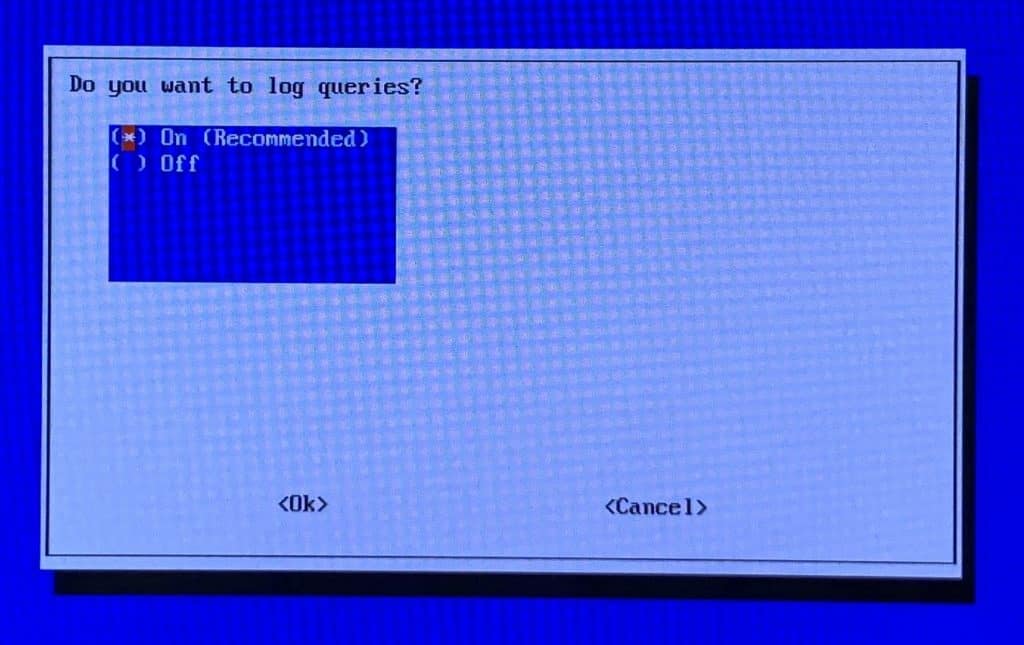 P-Hole is now configured.  You can disconnect your monitor and keyboard from the Pi.

Leave the Raspberry Pi plugged in somewhere with power and network connectivity.

Your other devices will still be receiving their DNS server details from your router.  You’ll need to manually set the DNS server on each device (or in the DHCP settings on your router if your router supports it).

You’ll need to set the DNS server on your devices to point to the IP address you set manually for your Raspberry Pi in the previous steps.