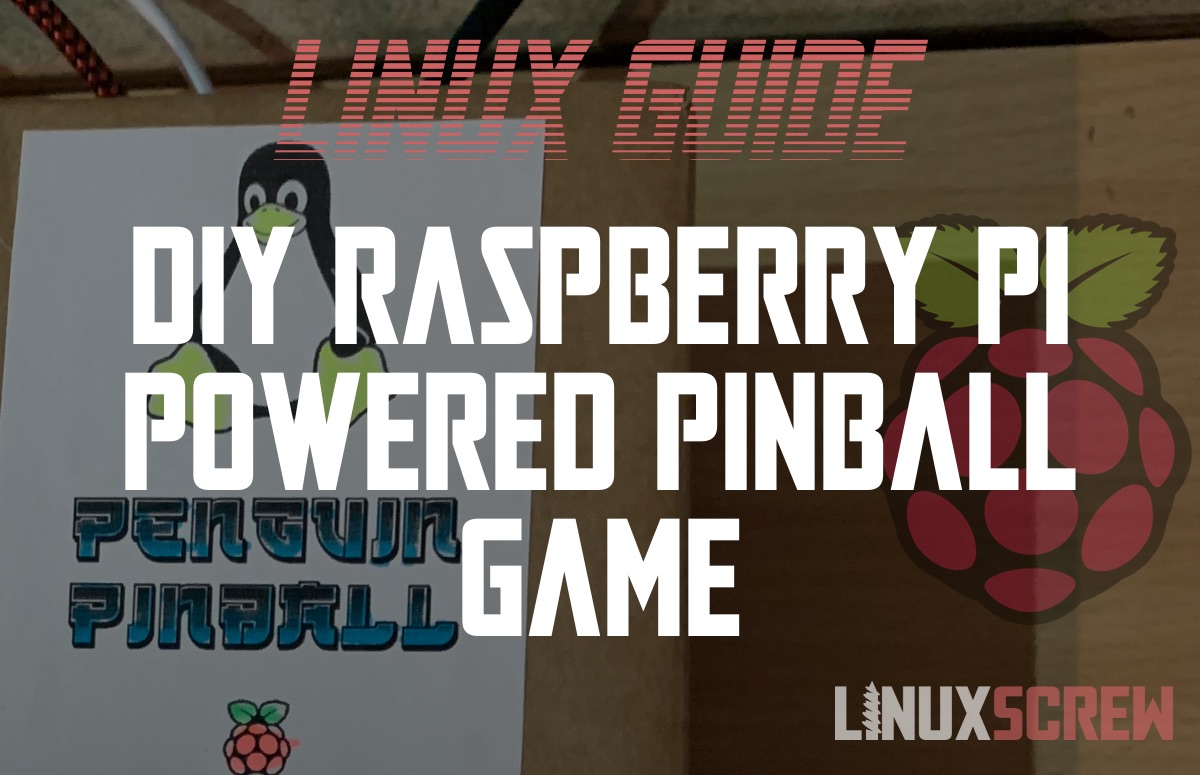 This article will show you how I built a DIY Raspberry Pi Powered Pinball game using GDevelop and an Arduino to add physical push-buttons to control the game.

GDevelop is a zero-code game development studio, so this article has almost no coding required.

I’ve been meaning to check out GDevelop for a while, so I’ve combined a simple GDevelop game with a 2-button Arduino game controller to make a little virtual pinball machine.  Here’s the finished product in action!

As you can see in the above video, we are building a pinball game with a moving ball, moving flippers, and some on-screen elements that cause the displayed score to increase.

First I’ll show you how I put the game together in GDevelop.  The game can be played in any web browser, so you can follow along even if you aren’t going to deploy it to a Raspberry Pi or build the arcade ‘machine’ itself.

As I mentioned, there is very little coding required to use GDevelop to make a game, so most of this article will be screenshot-orientated to show you how things are set up.

Let’s get started by downloading GDevelop from:

Creating the Pinball Game With GDevelop

GDevelop is really easy to use.  Your game is split into scenes (each one a separate visible play area) and you can drag and drop objects (game elements like players, enemies, and obsticles) onto the scene to place them.

Each object place has a set of properties which can be edited, and game logic can be added as events which respond to button presses or object collisions, or other conditions you may set.

Create a new GDevelop Project and call it Pinball.  You’ll be presented with a project with an empty scene called ‘New scene’ (simple a blank, black screen).

The following screenshots will show and explain how to set up the single scene used to create the pinball game.

Now we need to add the game objects to the scene.  We’ll be adding 9 objects:

All of these objects were added from the asset store (mostly because I cannot draw).  The GDevelop asset store contains a bunch of objects and sprites you can use in your project for free.

You don’t have to use the same objects I have used.  I’ve simply found random game sprites that can work in a pinball context.  Sword sprites were used for the flippers, a random X shaped laser sprite was used for the rotating obstacle, apples for scoring objects, etc.

Below are screenshots showing how each game object is configured.  Note that some game objects have been renamed from their name used in the asset store.

Then, edit the objects in the side bar to match those shown below to add the required game behavior to each object.

The behaviors will dictate things like collisions and physics, which will be used to make things move around when your game runs.

The score is a text object – drag it onto the play area.  Initially, it should be set to simply display the text ‘Score’ – the scene events added later will keep it up-to-date with the ‘Score’ global variable. I could probably have named this object to something more useful, it escaped my notice until it was too late.

This object is just a random object from the asset store which I have set to rotate at the top of the play area to act as an obstacle.

TiledWall is the object that will be used to make the side walls and roof of the pinball machine.  Drag 3 of them onto the scene and drag them to resize to create the walls.

The TiledFloor object will also need to be resized to make the floor of the play area. It’s a separate object to the walls as it will have different behavior (that being to reset the ball position when the ball comes into contact with the floor) assigned in the scene behaviour later on.

The Scene is Populated – Adding Scene Events to Run the Game

The events attached to a scene can be used to dictate the overall game logic.  This pinball game is pretty simple, so there are only a few events to configure for the scene.

At any point, you can click on the little bug icon in the top left of the screen to test and debug your game.

When you’re finished and happy with your pinball video game, you can export it so that it can be played outside of GDevelop.

There are a number of options – you can export to various devices and services.

I’ll be exporting to a Local folder so that I can copy the game to a USB stick and run it on a Raspberry Pi.

There’s kind of a lot going on there!  All of the screenshots above show how I have populated GDevelop to create my pinball game.  It looks complicated, but there is no programming involved, just setting dropdowns and text fields.

For an explanation of what each field does, I recommend checking out the GDevelop documentation – they’ll be able to explain things better than I can!

That takes care of the software side of things.  You can run the game now in GDevelop on your computer to try it out.

I decided to take things a step further and build a little cardboard arcade machine with buttons for the flippers, powered by a Raspberry Pi.

It’s a simple build process which should be achievable on your kitchen countertop with a few simple tools.

The parts used were:

I won’t be building my Pi into the cardboard box – I keep mine mounted on a chopping board for easy access to the ports and to keep all of the wiring contained.

I wanted some real arcade style buttons on the side of the pinball machine, so I wired some to the Arduino in a simple circuit.

I probably could have wired the buttons the the GPIO pins on the Pi, but this solution is more universal, as the Arduino uses a USB connection it can also be plugged into a regular computer which doesn’t have GPIO pins if you aren’t using a Raspberry Pi.

The Arduino IDE software is used to write and upload code to your Arduino.  You can download it from:

Once the Arduino IDE is installed, upload the following code to your Arduino board.

The code is pretty simple – it tells the Arduino to emulate a keyboard.  When one of the push-buttons is pressed, the Arduino sends the corresponding key-press to the computer as if it has been pressed on the keyboard.  The same keys are mapped as the inputs in the game in the GDevelop scene events, so that a button press = action on screen.

Installation instructions can be found here.

You’ll need to set the screen rotation to match the screen orientation using the below terminal commands:

The screen rotation will reset when the system restarts, so you might have to add the rotate command you require to your login scripts to make it stick.

That takes care of the hardware – let’s get this machine working!

The game application we exported from GDevelop earlier require a web server to run.  Install the Apache web server by running:

Copy the game files to your Raspberry Pi and ensure the directory they are in is called pinball.

The, simply copy that directory into the Apache web server’s directory:

You’ll need to do this using the sudo command as administrative rights are required.

Ready to go! Navigate to

In the web browser on your Pi and the game will launch!

Be sure to press the F11 key to make things full screen for best effect.

A Good Jumping Off Point

I think this one turned out pretty well.  The game is a bit wonky but it’s a good first effort.

With more time, refinement and a better artist, a really sweet pinball machine could be put together based on this basic starting point.

You could use a bigger screen and make a more complex play area with more obstacles, add sound and video, GDevelop does a lot more than was explored in this article, so get creative!

If you come up with your own pinball game be sure to share it with us!